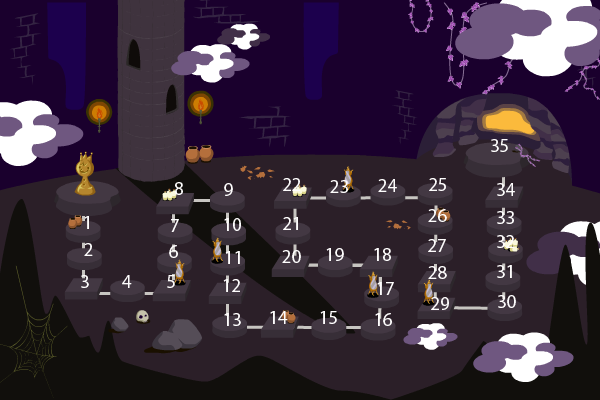 Inside the tower lies an engraved stone left by Org:

"The memories sealed into this tower belong to Yun. Here you will discover a laboratory full of deranged experiments carried out by Shasura. You will also find the scene of our final battle-where Yun lost her life. To survive, you must fight the macabre Phantom Guardians, who escort the White Dragon, Burisarigon. This merciless serpent serves Shasura as a loyal lieutenant. When confronting the Phantom Guardians, be on guard, for they known the weaknesses of real Puppet Guardians and they can do you serious harm.

Remember, you are keepers of this castle. You are Puppet Guardians whom I have created by magic. As you read this, the Sorcerer Shasura draws very near in his quest to capture the castle. The prospect of death stirs such fear in him that he uses the limits of his magic to extend his own life. He lives to see the day when this place belongs to him and its power and treasure are his. The safety of this castle, our sanctuary, depends on your ability to protect the Magic Mirror.

This mirror was created by Shasura to transport its users in a warp of time and place to any destination they desire. Shasura terrified by the rulers of the world by using it for assassination and mayhem. Had we not captured it, the 13 Kingdoms, allies against aggression, would have fallen. I fear that I cannot describe precisely where the mirror is hidden without putting it in jeopardy, but this much you must know, that which reflects also changes shape and slumbers. It is found in a blessed land above the clouds in a clear celestial sky where no rain ever falls."

Retrieved from "https://mirrorrealmsgames.fandom.com/wiki/Dice_Game_Stage_8?oldid=25001"
Community content is available under CC-BY-SA unless otherwise noted.