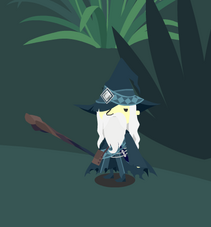 About: Maris is one of the older wizards who took part (along with Morias) in building the country of Splendor Mythos.
Location: Dice Game Stage 19: Land of the Dragons
Number of Quests: 8 (Currently Available: 2)
Difficulty: Easy/Medium

Land of the Dragons

I know who you are. You are Morias's subordinate. I am Maris, the prophet. I was the one entrusted with the future of Splendor Mythos. Probably Morias has already told you not to be deceived by this sly old wizard before you. I won't force you to do anything. I will just reveal the truth standing before your eyes.

Hear me. Splendor Mythos will collapse if it continues as it is. To stop that, everyone has to cooperate. Let me be clear. Morias is obsessed with power. I have created a secret society to help Morias see the truth. I would like you to cooperate me on that. If you are interested, bring a Silver Long Sword as a pledge to the cooperation with the secret society. With that I will perform the enrollment ceremony.

You're probably still doubting me, aren't you? You do not have to hide it. Same goes for me. There is way too few information about you so that we can trust you.

Let us teach you more about our secret, so that you can come to trust us. I have also participated in the founding of Splendor Mythos. Oh, are you surprised? That's right. I built the country together with Morias on the land of Haurianna.

Our model was a magic country named Orthos Mythos. At present that country has decayed, and all that remains now of it are its ruins called Lost Mythos. Why did it collapse? That is the important part. I do not know either. But, if that is elucidated, Splendor Mythos's collapse can also be avoided. It has also appeared in my prediction.

Now it is your turn. I want you to prove your loyalty to us once again. I want you to find fragments of dragon eggshells and bring them to me. It has great relations to our activities. Well now, go.

Well now, in our secret society we have a technique of using all sorts of banned magic. I was thinking of teaching you that secret technique this time, but I wonder should I?

First of all, I want to test you to see if you have the qualifications. In a place called the 4th level of the Cave of Trials there is a large black snake, Ragnarok. I want you to bring me its fangs.

If you achieve that, I will teach you one banned spell.

Well, this time I will also teach you a banned spell. Go to the place called the Dark Ancient Castle, fight with the Evil Fire monsters using the Water Ball spell, and defeat 5 of them. If you manage to do this I will teach you the "Dense Fog" secret spell.

Retrieved from "https://mirrorrealmsgames.fandom.com/wiki/Maris_the_Prophet?oldid=25000"
Community content is available under CC-BY-SA unless otherwise noted.